Class I - New Renewable Energy. Sources producing electricity or "useful thermal energy" (i.e., Class I Thermal) generated by any of the following resources, provided the generator began operation after January 1, 2006, except as noted below:

Use the sign-up page to receive notifications on the Renewable Portfolio Standard/N.H. Admin 2500 Rules

Class I Thermal – Useful Thermal Energy. Class I Thermal resources must be used to meet a set percentage of the total Class I RPS obligation as outlined in RSA 362-F:3. Eligible Class I Thermal sources include the following technologies that began operation after January 1, 2013, except as noted below:

For more information on the development of the Class I Thermal Renewable Energy Certificate Program.

Class III – Existing Biomass/Methane. Eligible biomass systems of 25 megawatts (MW) or less, and methane gas, provided the generator began operation before January 1, 2006. Methane gas sources which began operation prior to 2006 and exceed an aggregated gross nameplate capacity of 10 MW at any single landfill site are not eligible.

Class IV – Existing Small Hydroelectric. Hydro facilities up to 5 MW, provided the generator began operation before January 1, 2006, and complies with certain environmental protection criteria; and hydroelectric facilities up to 1 MW that are interconnected to the distribution grid in New Hampshire. Please note that the Commission has issued an Order waiving the PUC's administrative rule requiring certain Class IV facilities to have installed upstream and downstream diadromous fish passages. See Order 25,394. 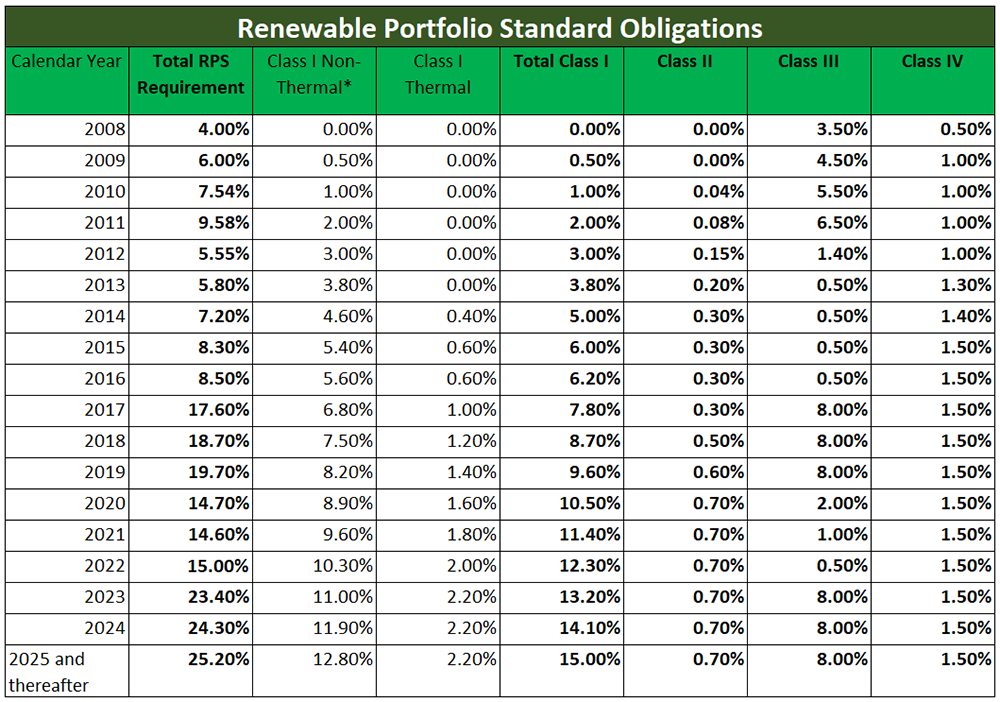 * Beginning January 1, 2018, a provider of electricity may use certificates issued based on the production of biodiesel in New Hampshire to meet up to 12.5% of the provider's Non-Thermal Class I portfolio standard requirements in any given year.
**Class I thermal is a subset of Class I. The thermal requirements are subsumed in the Class I requirement and are not additional to Class I

Proceeds from the ACPs are then used to fund qualified renewable energy initiatives and projects.

If you have any questions about the RPS program, please check our RPS Frequently Asked Questions for answers.

The information on this website is a summary of New Hampshire's RPS program. For more details see the Puc 2500 Rules.